Thanks in part to CLRC, I was able to attend the 2018 Association for Rural and Small Libraries (ARSL) Conference “Linking Libraries in the Land of Lincoln”.  I was also awarded a scholarship from the National Library of Medicine to attend the pre-conference “Stand Up for Health: Health and Wellness in Your Community”.

My conference experience actually began in Albany, NY.  My seatmate on the plane was another librarian on her way to the same conference.  Networking began as we discussed similarities and differences in our respective libraries.
The networking continued in O’Hare Airport in Chicago while we waited for our connecting flight.  Many librarians from around the country were waiting and a very friendly, informal meetup occurred.

The NLM pre-conference was very good, and I learned a lot about reliable sources of trustworthy information that can be used when helping patrons locate information on sensitive medical topics. Laughter was prevalent, but so was the exchange of knowledge.  Libraries and librarians, viewed as trustworthy by the general populace, can play a major part in improving the health literacy of their communities. The result is healthier, more aware communities with lower rates of chronic stress and mental fatigue and lower early death rates from cancer and diabetes.

Because we were in Springfield IL, the keynote speaker was Abraham Lincoln. He spoke in the 1st person and gave us a summary of his life, from childhood to the Presidency.  He spoke of the conflicts and difficulties he faced, but also amused us with his references to the world in our time, speaking of horseless carriages and cell phones.  Another great speaker was author Elizabeth Berg.  I had never read her work, but she spoke so eloquently and invitingly that I immediately pulled up my Mid York library account and ordered a couple of her books.

On the second day of the conference, we were addressed by Dr. Carla Hayden, via a live stream.  She spoke of her lifelong love for libraries and of the importance of small and rural libraries.  These libraries are the hubs of their communities, providing education, entertainment, social opportunities and much more for their residents. Dr. Hayden sees the Library of Congress as “America’s Library”, for all Americans, not just politicians.  She outlined some of the projects she is developing to better serve Americans. One that caught my attention is veterans, especially those from the Vietnam War, recording their memories to preserve their history for future generations.

The breakout sessions were many and varied.  I attended several, including “Size Doesn’t Matter”, “Library Signage”, “Serving the Underserved”, “Your Library within Your Community” .  I wish I could have attended several others as well; it was difficult choosing.

For me the very best part of the ARSL conference was the opportunity to network with other people doing the same things I do daily.  49 of the 50 states were represented and it’s reassuring to know that no matter what I’m dealing with, I can turn to others for support I work to improve my library and my community. 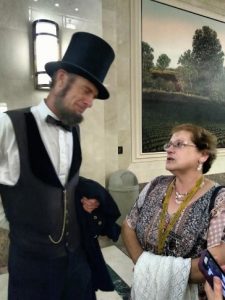 Are you interested in being our next Professional Development Award recipient? Check out the award page for the rules & requirements!